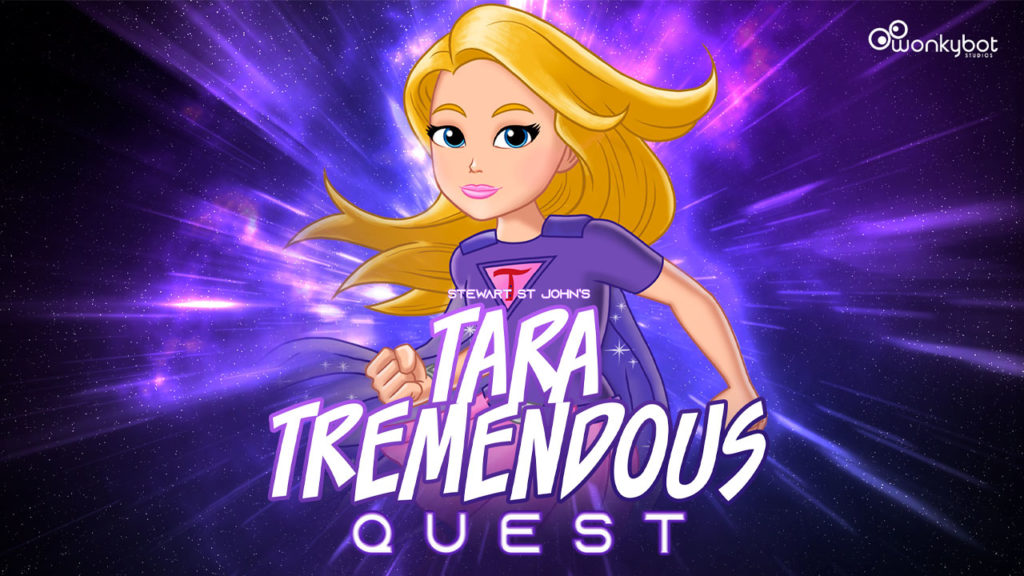 LOS ANGELES, May 13, 2020 — Wonkybot Studios has just dropped the first teaser trailer and revealed the key art for a brand new season of its Parents’ Choice 2020 Gold Award-winning flagship podcast series Tara Tremendous which will have its world premiere on Wednesday, May 27, 2020 with episodes airing weekly on Apple Podcasts, Spotify, Google Podcasts, Stitcher, Wonkybot.com and wherever podcasts are found.

Titled Tara Tremendous: Quest, the exciting 4th season is an action-packed, 12-episode thrill-ride that takes super-hero-in-training Tara Tremendous from the battle lines of a dystopian parallel world to an intergalactic war that unites the kids of Power University on a mission to deep space. Listen to the special trailer announcement right now on all podcast platforms, and watch the video trailer exclusively on Wonkybot.com

Created, written and voice-directed by award-winning writer and Wonkybot Studios founder Stewart St John, and co-produced with partners Todd Fisher and Michael Plahuta, Tara Tremendous centers around a girl who acquires the powers of every superhero in the world and must figure out how to use them while juggling school and friends.

The first teaser trailer features a heavily synthesized 80s music score by St John & Plahuta who constructed it utilizing some of the greatest vintage synthesizers of our time. Music has always been a key component of the show. After the first season, the producers created a live stage musical in New York featuring songs from the show performed by Broadway stars including Micky Dolenz, Annie Golden and more.

Tara Tremendous: Quest also features over forty voice actors recorded around the world, with Wonkybots’ high quality sound design that continues to push the boundaries of audio storytelling for kids and families.

About Wonkybot Studios
Wonkybot Studios, the children’s and family production, music and publishing company formed by industry veterans Stewart St. John, Todd Fisher and Michael Plahuta in 2015, is an incubator for St. John’s kids and family properties. Dedicated to creating entertaining and engaging characters, stories and tunes for kids and families across all media platforms which inspire, uplift and entertain the imagination, two of Wonkybot Studios’ properties — Tara Tremendous and Spooky Troop — have been released as award-winning podcast series, audiobooks, stage musicals and a forthcoming comic book series. For more information, visit https://www.wonkybot.com